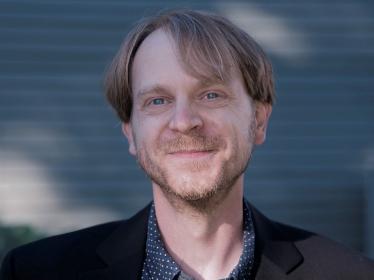 Adam Hill is a composer and bassist originally from Cleveland, Ohio. He has been a recipient of awards and grants from the Canada Council for the Arts, the Foundation for Assisting Canadian Talent on Recordings, SCI/ASCAP, Innovation PEI, the BC Arts Council, the Helene Wurlitzer Foundation, the Blue Mountain Center, the Kimmel Harding Nelson Center for the Arts, and the Sitka Center for Art and Ecology.

Additionally, Adam is a member of the award-winning Atlantic String Machine and is a performer fluent in several genres. He has appeared at the Stan Rogers Folk Festival, the Sisters Jazz Festival, the River City Bluegrass Festival, the Mission Folk Festival, the Harrison Festival of the Arts, the Whitehorse Poetry Festival, the South By Southwest Music Festival, the San Luis Obispo Mozart Festival, and Electronic Music Midwest. He has released four albums of folk music, two of which have reached the #8 spot on the National Folk and Roots radio chart. He has also performed on more than a dozen recordings spanning folk, rock, jazz, classical, and bluegrass genres.