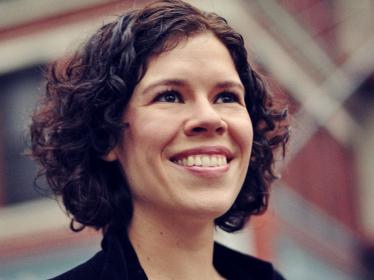 Dr. Hayley has been a soloist with the Vancouver Symphony, the Allegra Chamber Orchestra, the Turning Point Ensemble, and Capriccio Basel, and has appeared in recital across four continents. She has performed in festivals such as Sonic Boom, the Happening Festival, New York City Electroacoustic Music Festival, Gulangyu Autumn Festival (China), Performer’s Voice Symposium (Singapore), and Festival Atempo (Venezuela), and with organizations like the SMCQ, Chants Libres, CIRMMT, Codes d’accès, Vancouver New Music, Little Chamber Music, and the Land’s End Ensemble.

An avid and adventurous collaborator, her performances have ranged from early music to free improvisation. She is a member of the Erato Ensemble, the Broadwood Duo, and the Hayley-Laufer Duo, and has recorded with Postcommodity, Sun Belt, and the Negative Zed ensemble. She is the Artistic Co-Director of the Blueridge Chamber Music Festival.

Dr. Hayley is an enthusiastic and sought-after adjudicator, clinician, and teacher, and has served on the faculties of Vancouver Community College and the Vancouver International School of Music. She is a former visiting artist at Harvard University’s Radcliffe Institute, University at Buffalo’s Creative Arts Initiative, and the Afghanistan National Institute of Music, and a frequent Musician in Residence at the Banff Centre.

Dory Hayley holds performance degrees from the University of British Columbia, McGill University, and Université de Montréal. Alongside her musical activities, she recently completed a master’s degree in Public Policy, with a focus on cultural policy, at Simon Fraser University. Her research and artistic projects have been funded by the Canada Council for the Arts, the Koerner Foundation, the Social Sciences and Research Council of Canada, the BC Arts Council, and the Conseil des arts et des letters du Québec.