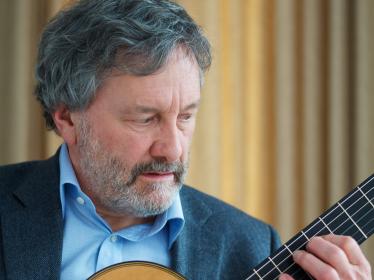 Peter Higham continues to perform and teach guitar for the Department of Music at Mount Allison University where he was Music Librarian from 1986 to 2012, and now Librarian Emeritus. In his teaching he stresses performance ideals focused on established principles of technique, and the historical importance of the guitar repertoire. Peter Higham began his guitar studies with Robert Jordan in Edmonton and continued his studies in London with Hector Quine and Carlos Bonell, as well as attending masterclasses with Julian Bream and Alirio Diaz. In addition to a Master of Library and Information Science degree from the University of British Columbia, he holds Bachelor of Arts and Master of Music degrees from the University of Alberta and is a Licentiate of the Royal Academy of Music.
As a performer, Peter Higham has collaborated with several vocalists, and in chamber music ensembles with Mount Allison University colleagues, notably in duet repertoire for cello and guitar. Previously, in Edmonton he formed and performed with the Tedesco Trio (flute, viola, guitar), and in St. John’s with the Webern Trio (soprano, clarinet, guitar). He has premiered works with guitar by several Canadian composers, including Violet Archer and John Beckwith and Atlantic composers Kevin Morse, Michael Parker, W.L. Altman, Alasdair MacLean, and Michael Miller. He has made special studies of the guitar music of Mario Castelnuovo-Tedesco and continues to contribute arrangements to the repertoire for voice and guitar, and for instrumental duos.  In September 2014 he gave the premiere performance of Ut re mi fa sol la: six fantasies for solo guitar composed for him by John Beckwith; his recording of this significant work was released on the CD Calling John Beckwith on the Centrediscs label.  In 2021 the Mount Allison University Archives launched the online exhibition of Peter Higham’s A Posy of lullabies https://libraryguides.mta.ca/aposyoflullabies/, a set of obscure early twentieth-century aurally transmitted lullaby lyrics and melodies enhanced by him with guitar accompaniments.