Working in their Ottawa office, Henderson-Hamilton conducted interviews with past and present staff members of the NGO, helping to gain insight into the philosophy of the organization and its partners across the globe. Her work is helping Inter Pares to document their institutional memory over the past 40 years.
Henderson-Hamilton’s time at Inter Pares started with a suggestion from International Relations Professor Dr. Dave Thomas and became a reality thanks to a generous Mount Allison supporter — Mr. Lynton R. Wilson. 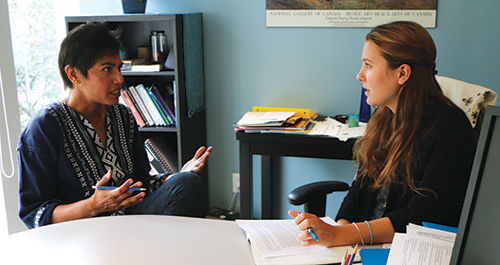 Henderson-Hamilton is the first recipient of the LR Wilson Internship in Public Service and Public Policy, established by Wilson, retired Chairman, President, and CEO of BCE Inc.; Mount Allison honorary degree holder; and long-time champion of public service. The internship, valued at $10,000 annually, allows PPE students to gain practical work experience in an agency, non-governmental organization, or government department during their undergraduate studies.

“I would not have had this experience without the Wilson internship,” says Henderson-Hamilton. “I have learned so much from this summer position and would like to thank Mr. Wilson, Inter Pares, and the University for this incredible opportunity. Internships like this teach you so much as a student. It is a really important element to the student experience.”

“Claire’s work over the past months was a big help in documenting the history of our programs in Asia,” he says. “But more than that, through her interviews she helped us to reflect on that history and how we make decisions about programs. It was a great experience for us and definitely two-way learning.”

“The links between politics and economics are usually more obvious but I found my philosophy teachings also came out during my internship experience,” she says. “You realize how important it is to have this basic foundation of skills, such as critical thinking through this kind of experiential learning. An internship is a great opportunity for any student, no matter what their degree.”

The philosophy, politics, and economics (PPE) program was established at Mount Allison in 2013. It is based on the renowned model at the University of Oxford and is one of only a handful offered in Canada.