Dr. Richard MacKenzie says much of his life and career has been a product of serendipity.

In fourth-grade he decided he wanted to become a doctor. He became the first in his family to graduate high school.

MacKenzie came to Mount Allison on the encouragement of his neighbour and seventh grade teacher, Gus MacFarlane, who had taken a position as the football and basketball coach.

“Mount A was like a rebirth for me into a whole new world,” he says.

He went on to McGill Medical School and to a residency in internal medicine at McGill’s Royal Victoria Hospital.

One cold night during his residency, he was stopped on the street and asked to examine a young woman in a newly-evolving youth clinic. He reluctantly agreed. 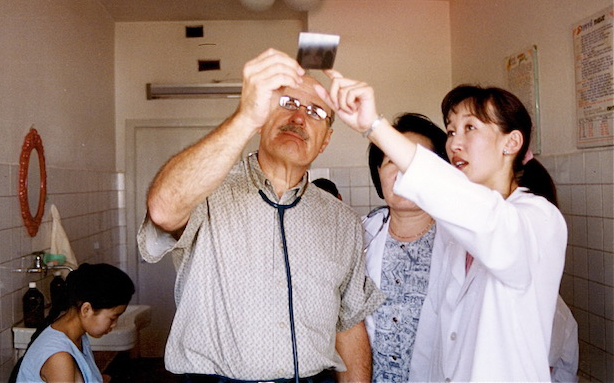 “That was the beginning of my realization of how much internal medicine focused on the descent of life and health decay with little teaching and clinical experience on the ascent of life that includes disease prevention and health promotion,” he says.

He went on to a fellowship in adolescent medicine in Los Angeles only to find it lacking in models and practices.

“My formal training had trapped me into only thinking ‘inside the box,’ trying to explain things by what I already knew or had seen or experienced. I needed to learn to think laterally, ‘outside the box,’ so to speak,” he says.

He began fashioning his own models and practices around adolescent medicine, as he volunteered at free clinics and was on faculty at the University of Southern California Keck School of Medicine. MacKenzie developed “a system of care” that took existing facilities and networks, giving them a common philosophy and drawing upon their expertise.

“I wanted a health system that involved the community,” he says. “We are just the organizers. It’s not a hospital system, but a system that draws upon community strengths and abilities.”

This way of thinking would change the landscape of his career.

The World Health Organization came calling and wanted to adapt this system in developing countries. This led to consultations around the world and a 20-year project in Mongolia.

“Over 75 per cent of the world’s adolescents and young people are in developing countries — with many of these countries seeking hope and direction in prototypes of medical and health care that had their origins on that cold night in Montreal,” he says.

Hollywood would be the next to come calling.

His holistic approach to working with young people had brought him a severely anorexic patient who many had given up on. He challenged her to think of her disease as a gift — and his process worked. She went on to become a screenwriter, creating the Netflix movie To the Bone based on her experience. Keanu Reeves played MacKenzie.

Now in a stage of semi-retirement, MacKenzie looks to complete his project in Mongolia and start a memoir of his life.

“My aspirations were to just be a ‘horse and buggy’ doctor. But serendipity had other intents,” he says. “The youth of the world, in a sense, became my patients and house-calls were nation-calls. The gifts of knowledge, realization, and heartfelt appreciation have kept the flame of compassion alive inside of me. In this age of millennials, our wisdom of experience gives us the opportunity to be a perennial.”