The following is an extended version of the article that appears in the print edition of the Record.

From 1947 to 1959, every student who attended Mount Allison walked through Christine MacInnes’ door.

MacInnes was the University’s registrar and in the days before online registration, was the first and last person each student met at Mount Allison: she admitted them to the University and handed them their diploma at graduation.

But MacInnes had a special touch that has made students who attended Mount Allison under her watch recall her by name 60 years after she retired. 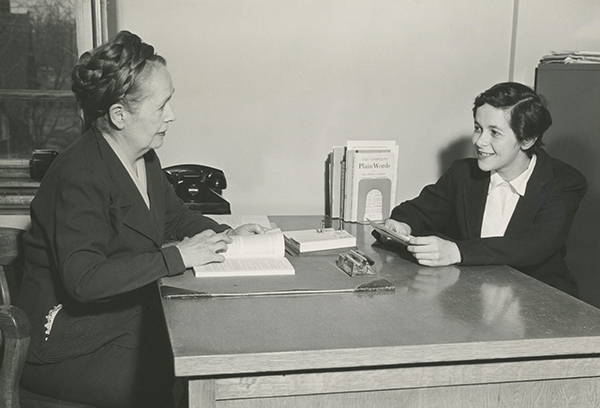 Greenwald grew up in New York City and his high school advisor told him his best bet was to join the military as he wasn’t cut out for university.

But the summer after graduation, he travelled to Nova Scotia with a friend’s family and one Saturday the two boys ended up at Mel’s Tea Room in Sackville.

“I walked up the street and saw a sign, ‘Welcome to Mount Allison University, Home of the Mounties’ and there were these three ivy-covered buildings,” he recalls. “I walked into one and there behind a long counter was Christine MacInnes and she said, ‘Who are you and what are you doing here?’”

That began a conversation that lasted hours.

“She said to me finally, ‘You should go to college,’ and I said, ‘I barely got out of high school!’” Greenwald says. “Maybe she saw something in me that I didn’t — she was a pretty good judge of horseflesh.”

Greenwald went on to graduate from Mount Allison, obtain master’s degrees from Columbia University and the Massachusetts Institute of Technology (MIT), and earn the University of Oxford's first PhD in orthopedic and engineering sciences. He has worked on moon rockets and fighter planes and is one of the world’s foremost experts in orthopedic engineering, in particular with regard to artificial joint replacements.

And he attributes this to MacInnes, not only for getting him to Mount A, but for keeping him there.

“She kept an eye on me, she was determined I wasn’t going to screw up,” he says with a laugh. “I struggled through my first year, but I graduated decently four years later thanks to Christine MacInnes.”

MacInnes came to Mount Allison by necessity, not choice. 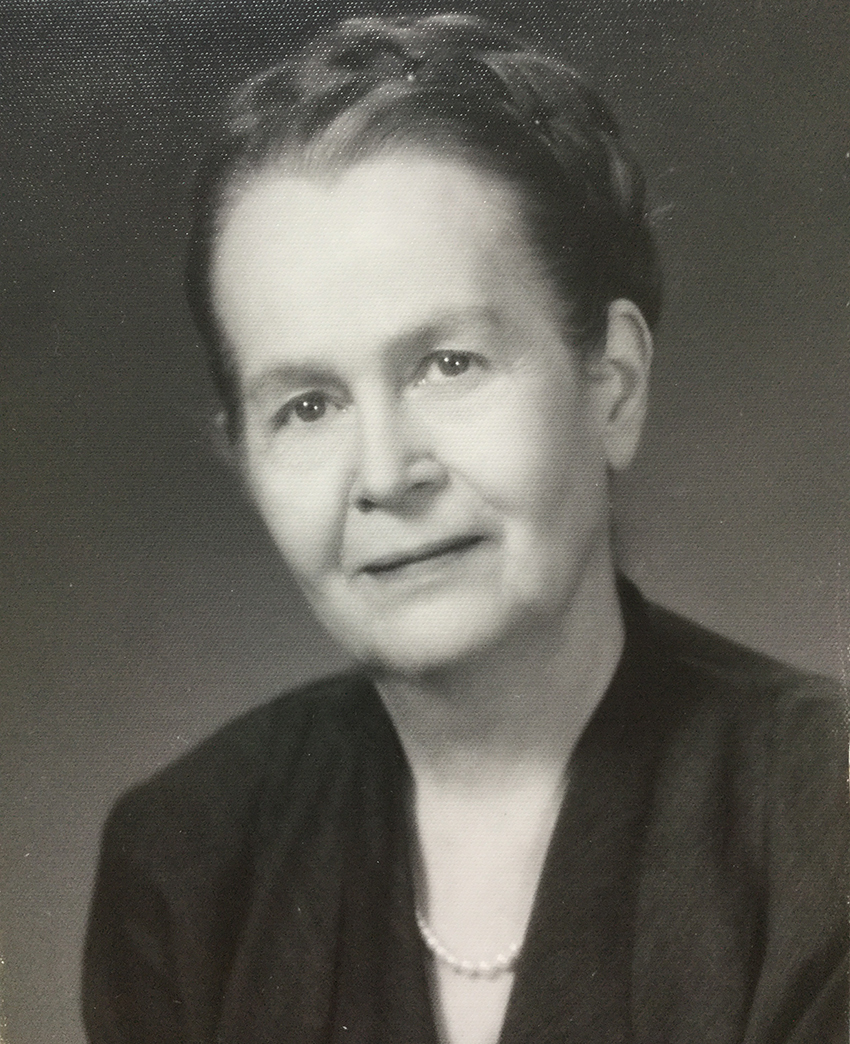 Her husband, the Rev. John Knox MacInnes, died suddenly in 1945. At age 52 MacInnes found herself a widow with two teenage sons still at home — and no home to keep them in as they had to move out of the manse.

“I’m sure her United Church connections (brought her to Mount Allison),” says Fred MacInnes (’52), MacInnes’ youngest son. “They put her in housekeeping to get her something right away, then the next year they made her assistant registrar to Dr. (Herbert) Tucker, and when he retired she took over as registrar.”

Her two sons moved to campus with her and lived in the student dormitories. Fred finished high school at the Mount Allison Academy and the first two years of his degree at the University and went on to a career in medicine.

MacInnes’s daughter, Elizabeth Riehm (’44), says her mother thought it was very important for women to be educated and both Riehm, who graduated from Mount Allison with a degree in chemistry, and her older sister Margaret, attended university — very unusual for women in the 1940s.

“She was a great believer in education, not only for herself, but for others, so when she would run into somebody like Seth — she was about having faith in somebody and making them believe they can do it, inspiring people. I think education was her mission,” Riehm says. “Making the jump from a minister’s wife to a university registrar, I don’t think she saw that as very different. She encouraged people, she helped them.”

Fred MacInnes says his mother was close friends with the mother of former Nova Scotia premier, the late John Buchanan (’54).

“He liked to tell the story that when he was ready for university he told his mother he wanted to go to St. FX,” he recalls. “She said, ‘No you’re not. You’re going to Mount A where Christine MacInnes will look after you!’”

“She really was a big support for the Chinese students, more than academically,” Fred MacInnes says. “They were away from their families and it was different and new. They were always giving her little gifts — shawls and things to wear — and she had teas for them.”

David Kiang (’60) from Shanghai, China, was studying at boarding school in Hong Kong in the late 1950s. Hong Kong had only one university at the time, so most students ventured abroad for their post-secondary studies, primarily to Australia and Canada.

Kiang had a friend in Saskatchewan, but the registrar at the university he applied to there wanted him to acquire more credits before accepting him. MacInnes looked at his transcript and credited him with nearly a whole year worth of university — enough that he was able to start at Mount Allison with second-year standing.

“The registrar understood the system we were studying in — that the last year was a higher level than Canadian high school — and counted my Form Six courses as first-year university courses,” Kiang says.

At Christmas one year, she arranged for Kiang to spend the holidays with friends in Saint John, NB who had been missionaries in China and were familiar with the language and culture.

“She was very kind,” he says. “She was interested in Canadian students too, but they didn’t need as much help.”

Riehm says it was common for those of her mother’s generation to take an interest in young people and in helping them reach their full potential.

“And I think she just liked students,” she says. “She was very motherly, in the best sense of the word — not treating them like children but wanting the best for their future.”

Kiang went on to do a master’s and PhD after graduating from Mount Allison in honours physics. He then moved to Halifax to teach at Dalhousie University. By then MacInnes was retired and also living in Halifax. When she heard Kiang was to be married, she leaped into action.

“She knew all the ministers, so she found one for me and she arranged the reception for us,” he recalls. “And Elizabeth arranged our honeymoon.”

Kiang and MacInnes remained close the rest of her life.

“She was like a family member,” he says. “As she got older, she needed more help, so I would drive her around and so on.”

Greenwald also never forgot MacInnes and the key role she played in helping him find his path. He set up a bursary in her honour in 1981 that has helped dozens of students attend Mount Allison — a legacy of which MacInnes would no doubt approve.

The Class of 1959 dedicated the yearbook to MacInnes to mark her retirement and the University awarded her an honorary degree in recognition of her service the same year.

Christine MacInnes died in 1985. She is buried in the Robie Street Cemetery in Truro, NS.

Editor’s note: Our thanks to University Archivist David Mawhinney for his assistance with this article and for generously sharing his research and insight.

Christine MacInnes was also mentioned in a previous Allisonian Archives piece — read about how she assisted Danny Gray ('51) in Changemaker in the Winter 2018 issue.

Christine MacInnes with a student in her office.

Portrait of Christine MacInnes that appeared in the 1959 yearbook.