The Importance of Being Jass-Sainte

This is not the Gould who arrived at Mount Allison in 2012.

When it came time to go to university, Gould wanted out of the small rural community in New Brunswick in which the 2017 drama studies graduate grew up.

“Mount A was sold to me as ‘Mount Gay’ — very friendly, very open, and I thought, ‘I want that,’” Gould says. “I was just coming to terms with accepting who I am.”

Mount Allison opened that door, but closed another: for the first two years, Gould consciously left behind Acadian identity.

In third year, Gould had an epiphany that continues to shape an exploding career.

“I realized I could use the way I speak [as an Acadian] as my means of expressing myself,” the artist says.

“I was starting to consume Acadian culture on my own account and I started realizing there was room for me to do my own version,” Gould says. “So I’m there in my last years at Mount A, deep into my Acadian questioning, but only beginning to question my queer identity. Up until 2017, I was internally homophobic and transphobic, towards myself. I put these boundaries and standards on not being too queer — like I can date a man, but there was no way I was wearing pink.

“There was this perfect collision of realizing there was a void in Acadie that needs to be filled and realizing it is probably time to accept myself.”

Being a non-binary queer francophone comes with additional challenges — the entire structure of the language is based around words being masculine or feminine.

“This cup of coffee is not a cup of coffee — this cup of coffee is a woman,” says Gould, pointing to a cup. “There are things at play for French queer people that people who speak English don’t even have on their radar. The whole basis of your language is subconsciously denying your identity. So for me, who expresses themselves as a mashup of gender — it is how I perceive the world and how I want the world to perceive me — in a language that is so gendered a lot of people have that much more of a hard time to wrap their mind around it.”

Acadians in Southeastern New Brunswick, however, are known for speaking Chiac, a unique blend of French and English. 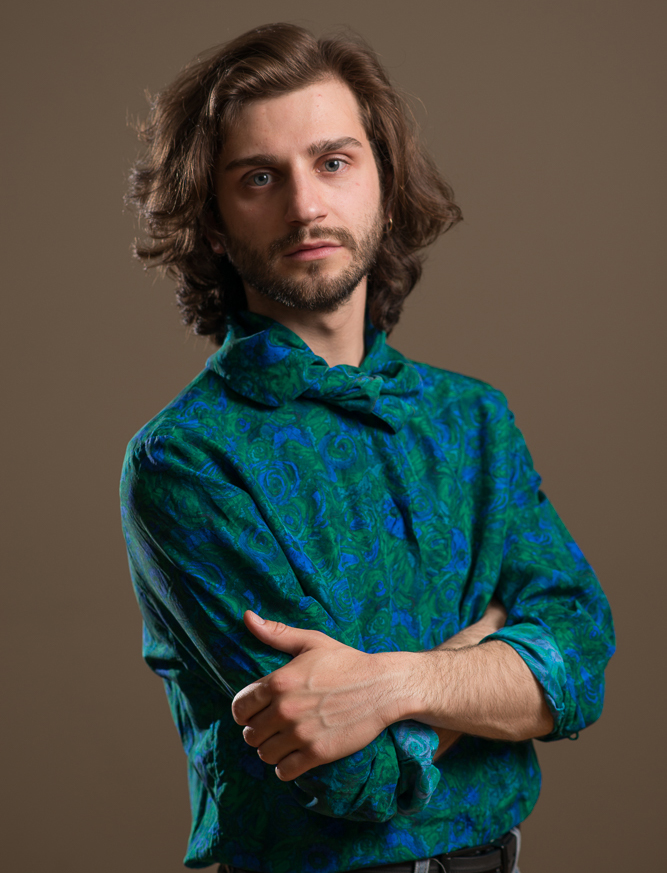 “Chiac is the queerest language of them all,” Gould says. “When we talk about queerness, it is not just about being gay, it is challenging norms in a way and if you look at Chiac, that is what it is — taking parts of English and taking parts of French and creating this other thing that doesn’t devalue the first two things. So, for me, Chiac is a metaphor for queerness and speaking Chiac can take gender away by replacing it with another word.”

Onto the backdrop of these deep thoughts on language and identity appeared Jass-Sainte Bourque — Gould’s alter-ego and best-known artistic endeavour to date.

Jass-Sainte is the pink camo and bandana-wearing star of about 50 YouTube videos, and has a social media following of about 30,000 — incredible when one considers only about 215,000 New Brunswickers say they speak French most often at home.

“I would love to say it was a stroke of genius that I create this queer Acadian character and everyone is going to love it, but it wasn’t,” Gould says.

Instead Jass-Sainte evolved slowly out of a Chiac blog Gould began writing in February 2017.

“Then I started doing videos of me being a complete weirdo. It was a version of an Acadian matante (aunt), gossiping with their girlfriends.”

But after several videos, Gould took a step back and looked critically at what had been produced.

“I thought this is pretty sexist of me, it is not a true depiction of an Acadian woman. I’m capable of doing a better character than that.”

In other words, Gould wasn’t content to settle for the cheap laugh.

Inspired by afrofuturism, a literary concept in which black writers and artists imagine a reality where slavery had never existed or a point far in the future where the legacy of slavery no longer applies, Gould began to develop Jass-Sainte.

“I realized Jass-Sainte is a person who lives in a rural setting in the woods, a place with camo culture but without any of the sexism or homophobia that exists today. So to be gender queer and bisexual is as normal as anything else. And this is why Jass-Sainte is so egotistical and confident — she has no reason to question the validity of her identity, it just was never a thing,” Gould says.

As Jass-Sainte, Gould is breaking down barriers.

“It blows my mind to see rural Acadian people who don’t necessarily have a background or huge knowledge-base in queer culture laughing at this queer non-binary person,” the artist says. “But I’m giving them permission to laugh with me and they have no idea the work that is happening in the background.”

Gould’s biggest professional coup to date is arguably getting the nod to host — as Jass-Sainte — the 2019 National Acadian Day festivities in Moncton, NB during the Congrès mondial acadien, a celebration that was televised nationally on Radio-Canada. But it was another event that is closest to Gould’s heart.

“Getting verbal feedback from more than 20,000 people — that was wild, wild, wild, as was getting to meet Jeremy Dutcher and Edith Butler. That was amazing, but it was nothing compared to the 200 people who showed up to see the 20 people from my community,” Gould says, referring to “the best thing I’ve ever done,” — the first Drag Ball Acadien, which took place in August 2019.

Drag balls have been around for decades and provide an opportunity for people to express their queer identity through drag and other forms of expression in a pageant-like event.

“It was the most gratifying, fulfilling, uplifting, emotionally-intense experience I’ve ever had,” Gould says. “I have been doing the Jass-Sainte character for two years now and I could walk out of here in a camo bikini and Moncton would be like, ‘Yeah, Jass-Sainte! Go!’, but that is not the reality for other queer Acadians living in rural areas. This was about creating a space for them to find their inner Jass-Sainte. It was pure magic to see my community shine.”

Although Jass-Sainte has opened many doors, she can’t say everything Gould wants to say. So Gould has two worlds, showcased by two Instagram accounts: one as Jass-Sainte and one as Xavier Gould, which highlights poetry, drag performances, and other professional work.

“Drawing that line for people has been very difficult. People forget that I’m a person. People in Moncton and Southeastern New Brunswick recognize me every day because the product is my face, and that has been really weird,” Gould says. “Some people identify me as a vlogger, but I don’t see myself as a vlogger at all. That is just the thing that has been leading me to other things. There are so many things I want to do and so many things I want to say.”