In the 10 years since her graduation from Mount Allison University, Gretchen Lescord (’09) has worked to launch an impressive research career in biology and environmental studies, first pursuing a master’s at the University of New Brunswick and then a PhD at Laurentian University in Sudbury, ON. 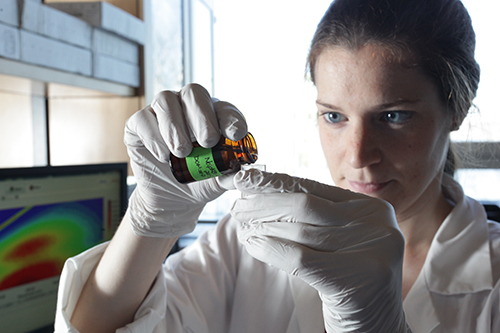 She is currently working as a post-doctoral fellow out of the Vale Living with Lakes Centre, a co-operative freshwater ecology unit, located on the Laurentian campus. The award-winning, LEED-certified building houses researchers from the university, the Ontario government, and the university’s Science Communications master’s program. It has welcomed many notable guests including Margaret Atwood, Jane Goodale, Justin Trudeau, and Sudbury’s own Alex Trebek.

“Throughout my doctoral studies, and now in my post-doc, I’ve been able to work with scientists from different sectors, in the field and within this building,” she says. “It’s great to have these areas of research intersect.”

And of course, you can’t go too far without finding another Allisonian. Lescord works with Dr. John Gunn (’73), Canada Research Chair in Stressed Aquatic Systems and founding director of the Centre.

Gunn, a fisheries biologist, has spent the past 40 years studying ecology and effects of pollution and climate change in the Canadian Shield region in Northern Ontario. He has been involved in several notable projects, including the Ontario provincial acid rain research program and the Sudbury re-greening and lake restoration program, which focused on rehabilitating the region’s landscape and watersheds. The program marked its 40th anniversary in 2018 with over a 97 per cent reduction in local air pollution, 10 million trees, and healthy fish population returned to many local lakes over the past four decades. This global “good news story” was the focus of Earth Day programming in April 22, 2019 on the CBC Radio show Ideas with Paul Kennedy.

Originally from Fredericton, Gunn grew up in Cape Breton, but says his research career really started on the Tantramar Marshes as a biology student at Mount Allison.

“I studied biology with Colin Patterson, who really encouraged and mentored his students. Mount A had a relatively new honours program at the time. There were about six of us in it, most aiming to go to medical school,” says Gunn. “I really enjoyed research. He [Patterson] encouraged me to pursue research and gave me the opportunity to work in the field in the summer of 1972. My first project was on freshwater clams in marsh lakes.”

Lescord, who is originally from Maine, joined Gunn’s research team as a PhD student in 2014. Her research looked at mercury concentrations in freshwater fish in Northern Ontario, with a focus on the kinds of fish consumed by First Nations communities in the remote region.

She says her research career also began at Mount Allison.

“I’ve been fortunate to conduct research and also gain some teaching assistant experience throughout my degrees, starting at Mount Allison,” she says. “I worked with Dr. Ron Aiken and others as an undergrad and this experience helped prepare me for future work with my master’s and PhD.”

She is currently developing methods to measure the toxic form of chromium (Cr6 or hexavalent chromium) in fish.

“There are two kinds of chromium common in the environment, one is toxic (Cr6), one isn’t (Cr3). Currently, we don’t have a way of differentiating between these two forms in fish,” she explains. “We’re working to develop a method to measure Cr6 in fish in the region of Northern Ontario known as the Ring of Fire for its rich mineral deposits.

“While the area is not yet developed, significant mining activity is planned. The data from my PhD and post-doc will serve as a baseline to measure the effects of both industrial development and climate change on fish and the populations that depend on them, most notably First Nations communities who rely on locally-caught fish for subsistence in the region.”

Lescord’s PhD research was focused primarily on fish within the remote Attawapiskat watershed in the Far North of Ontario, an area roughly the size of Nova Scotia. She will continue her analysis on chromium levels over the next two years in many such rivers and lakes as part of the centre’s research team. Lescord’s PhD thesis was awarded the Governor General’s Gold Medal award for academic excellence at Laurentian’s 2019 spring convocation.

Gunn says having scientists from different sectors in the Living Lakes Centre helps give research like Lescord’s a wider audience and provides valuable data directly to those developing environmental monitoring programs.

“Students are able to work with scientists from academia but also those working for several departments of the government, all down the hall from each other,” he says. “Having these different perspectives come together helps towards the bigger picture of environmental monitoring and management. This is essential in a region like Northern Ontario that has a small population over a larger geographic area.”