Nova Scotia artist Tom Forrestall has had a fascination with silver spoons for as long as he can remember. Growing up in the Annapolis Valley, his mother collected Georgian silver spoons from rummage sales and church sales. One day she gave him a handful of them to paint.

“I started painting them in the early ’50s and I’ve still got them laying around the studio. It grew out of that and stuck with me ever since,” he says.

For many years, Forrestall had wanted to paint the Allison silver spoons — and this year that aspiration was realized.

In 2006, Forrestall created a bursary fund in memory of his late wife, Natalie, raising the initial funds to support Fine Arts students by selling one of his prints.

“It was always stuck in my head to do another print sometime,” he says. “But what of? The idea of the Allison spoons came back to me and I thought, ‘That’s the thing to do.’”

The set of silver spoons belonged to the family of the University’s founder, Charles Frederick Allison. Joseph Allison, Charles’s grandfather, brought them over when his family emigrated from Ireland.

The story is documented in the University Archives:

“The tradition runs as follows: One year (perhaps 1768) when the landlord’s agent came round collecting rents he stopped for dinner at Joseph Allison’s house. In his honour, the family’s silver was used at the table. After the meal the agent said: ‘Allison, if you can afford silver on your table you can pay a bigger rent. Next year it will be raised.’ ‘I will emigrate rather than pay a higher rent,’ was the reply.

The rent was raised and Joseph Allison sold his farm stock and set out, with his wife and six children, ranging in ages from eighteen years to one year, by ship for Pennsylvania, where his wife had relatives. The vessel was wrecked on Sable Island, but the passengers were rescued and brought to Halifax. While they were waiting for an opportunity of passage from Halifax to Philadelphia, some of them were induced to go up country and look at some of the lands in the former Acadian districts...”

“Those little spoons, Mount Allison’s existence hinges on them in a way,” says Forrestall. “If it hadn’t been for the landlord seeing the spoons and wanting to put the rent up in Ireland, Mount Allison might not be here today. They have a powerful symbolic meaning.”

From March 19-21, 2019, Forrestall set up shop to paint the spoons in Mount Allison’s Library, where they have been on display for decades. He adjusted the proportion of the small spoons in order to showcase the detail and the stamps on the back. He says painting in the library made him feel young again.

“Sitting in the library with the students around me, it is infectious,” he says. “They are full of life and vim and vigour and it brings you back.” 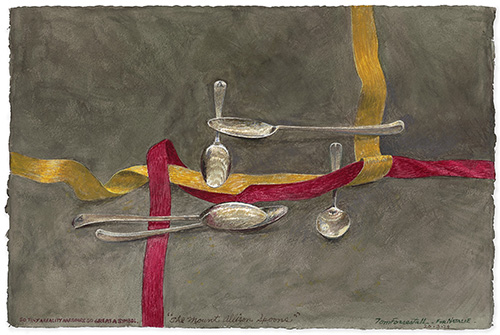 Forrestall’s finished piece was unveiled at Reunion in May. One hundred prints are available, valued at $750, with $300 from each painting being a tax-deductible donation to the Natalie Forrestall Bursary Fund to support Fine Arts students at Mount Allison.

If you look closely, Forrestall signed the original in a special way, adding “For Natalie” after his name.

“She did so much for me,” he says. “She gave of herself and had faith in me when I didn’t have faith in myself.”

If you are interested in purchasing one of the prints, contact the Alumni Engagement Office at alumni@mta.ca or 1-866-890-6318.