‘We can sing, but we do not’ | Mount Allison
Skip to main content
Allisonian Archives

Allisonians at War series wraps up after five years
By: Aloma Jardine

In 2013 Mount Allison librarian emerita Margaret Fancy was combing through old copies of The Argosy, indexing material related to the First World War.

“‘You have to do something with this,’” she recalls telling her husband Alex Fancy (’61), Mount Allison professor emeritus of drama and founder and director of the Tintamarre theatre troupe. “It was so touching and so beautiful.”

Alex rose to the challenge — and more.

“This was supposed to be a one-time thing, but here we are,” he says.

The final performance of the fifth and last installment of the Allisonians at War series — one commemorating each year of the war from 1914 to 1918 — was held on Reunion Weekend.

“After the first performance in 2014 we realized just how engaged audiences were by it,” Alex says. “We realized we were channeling voices from the past and it seemed an important thing to do and to continue.”

The verbatim theatre pieces pull directly from The Argosy as well as the two local Sackville papers of the time. Alex says one of the reasons Mount Allison has such a rich record of the First World War is because the editor of The Argosy made it his mission.

“Ralph Sharp (1914) was so determined The Argosy be a means of communication between the nurses and soldiers who were scattered all over the world,” he says. “Their experiences were unprecedented. The world was turning upside down, and they wanted to have a permanent record. He wrote about how ‘100 years hence’ other students would wonder about the war years. It was absolutely compelling.”

Margaret says one of the most poignant lines for her came from a piece in the April 1918 issue talking about life on campus.

“They became our friends,” Alex adds. “I felt as if I knew these people. And each year when somebody’s name came up, I would think, ‘I hope they don’t get killed before this year gets out.’”

Although the series is over, Alex and Margaret’s work on it is not quite finished yet. They are planning to collect the scripts together and ensure they are properly preserved in the Mount Allison Archives.

Online exclusive: Each performance was a snapshot of what happened in that year of the war. But that left the audience wondering what happened next, so the Record Online undertook a little research to find out the fate of some of those mentioned. 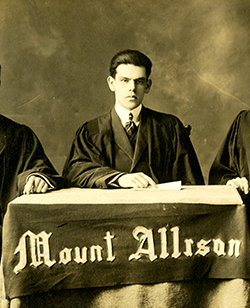 Ralph Sharp (1914), The Argosy editor to whom we owe much of the Mount A record of the First World War, went overseas in 1917. He returned to journalism after the war, first with the Sydney Record, before moving on to Ontario.

According to a Class Note in a 1927 issue of the Record, he was on the editorial staff of the Border Cities’ Star in Windsor, ON and had just married. He later worked at a newspaper in Detroit before moving on to the New York Daily News in the early 1930s, which at that time had the largest circulation of any paper in North America. Sharp was a news editor at the Daily News for the majority of his career, working until he was close to 70.

Sharp had two children, both of whom attended Mount Allison. James Sharp (’51) and Jean (Sharp) Cochrane (’53) both followed in his footsteps and became editors of The Argosy. Sharp died in White Plains, NY in 1970. 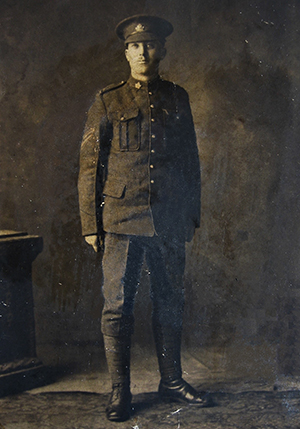 Parlee Ward wrote longingly to his wife, Electra, in the spring of 1917 of his hope of being home by Christmas. Ward and his brother Arlington both ended up in the thick of the fighting at Vimy Ridge on April 9, 1917. Arlington was killed and Parlee survived, but had to have his leg amputated.

“But don’t worry, will you, we have to accept such things, and believe me, I am a lot better off than a lot of the poor chaps I see,” Ward wrote to his wife. “And there is one thing which will perhaps cheer you up, and that is, I won’t have to go back to the line anymore, so I stand a great deal better chance of getting home than I did.” 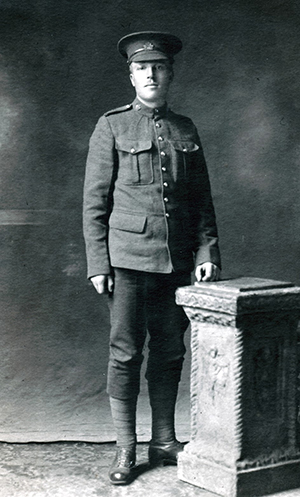 Ward did get his wish to be home for Christmas. He was honoured at a gathering in Rockport on Jan. 10, 1918. The first of the couple’s six children, Vivian, was born later that year, and one of their sons — named Arlington for his uncle — served in the Second World War. Ward worked as a telegraph operator with CP, retiring just a few years before his death in 1958 at the age of 68. He is buried in the Sackville Rural Cemetery.

The photograph of Parlee Ward is courtesy of the Colin MacKinnon collection and appears in the following article, which tells Arlington Dixon’s story: MacKinnon, Colin M. 2017. Pte. Arlington Dixon Ward (1895 – 1917) at Vimy; one of the fallen. The White Fence, Newsletter of the Tantramar Heritage Trust, Sackville, New Brunswick, Issue #78, November, pp. 4-8. https://heritage.tantramar.com

The photograph of Arlington Ward was taken by E.P. Smith at the studio that later became Pridham’s in Sackville. It is provided courtesy of Jeffrey P. Ward, Parlee’s grandson, and author of Head of the Bay: A History of the Maringouin Peninsula, which offers valuable information about Parlee, Arlington, and many others who lived on the peninsula that runs from Johnson’s Mills to Rockport.

Another Mount A grad who appeared in several Allisonians at War is Annie Strong (1907). Strong was a nurse and signed up with the Canadian Army Medical Corps within a few weeks of war being declared. She served at hospitals in France and England and received the Royal Red Cross, First Class for distinguished service in the field.

She married a Canadian soldier, Greville Shaw, but he was tragically killed just days before the end of the war, on Nov. 3, 1918. The last information we have on Strong is that she was working at a military hospital in Quebec after the war. If any Allisonians have any further information about Annie Strong, the Mount Allison Archives would be grateful to have it. 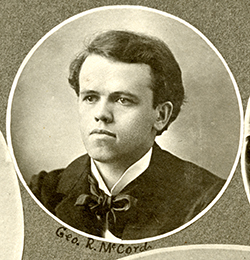 George McCord (1899), a Sackville lawyer, enlisted the first month of the war. His vividly descriptive letters were often printed in the Sackville Tribune.

He survived the war, but died just a few months later on Feb. 1, 1919, of heart failure, at age 44. He is buried in the Sackville Rural Cemetery. 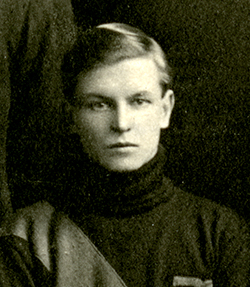 Carl Heckbert (1915), another prolific correspondent, attended the Mount Allison Academy before the war. Heckbert was wounded in 1916 and sent home. He married Vessie Taylor of Port Elgin in 1920 and they eventually made their way west to Alberta where Heckbert worked first as a carpentry instructor at the Alberta School of Agriculture, then in the insurance business.

After his wife’s death in 1963 he married Helena Craig. Heckbert served as the provincial president of the Canadian Legion, as secretary-manager of the Vermilion Agricultural Society for 32 years, and ran for federal office a couple of times, though was never elected as a Member of Parliament. He also wrote a book called Vermilion Memories in the 1960s. He died in Vermilion, AB in 1969. 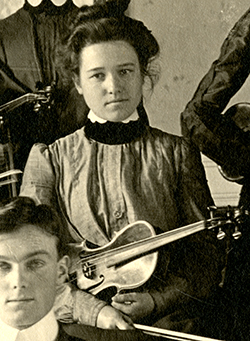 Carobella Weldon (1902) had one of the most dramatic stories in Allisonians at War. After her husband, Chalmers Jack Mersereau, enlisted, she and their two children moved to England. When Jack was gravely wounded at the Second Battle of Yprès in April 1915, Carrie sought the help of Sir Max Aitken (later Lord Beaverbrook) and crossed to France to find him. When she arrived in Boulogne it took her a day and a half to get permission from General French to go to Jack — close enough to the front lines that she could hear rifle fire. After chasing from place to place, she finally found him and accompanied him back to England.

Carrie served as a member of the first executive of the Fredericton branch of the Mount Allison Alumni Association, formed in March 1931. She died in Toronto, ON in 1978 and is buried in the Fredericton Rural Cemetery.

Jack Mersereau enlisted at the age of 34. During the Second Battle of Yprès in April 1915 he was wounded in the head and left for dead on the field. When he regained consciousness he found he could run, but, the local paper reported, “when he tried to walk was unable to keep his limbs working properly”.

Although he was initially given no hope of recovery, he survived the wound and returned to Canada in August 1915. He was awarded the Distinguished Service Order (DSO), second in merit only to the Victoria Cross, in 1919 for his actions during the Second Battle of Yprès. After the war he worked in insurance until his death in 1942 at the age of 62. He is buried in the Fredericton Rural Cemetery. 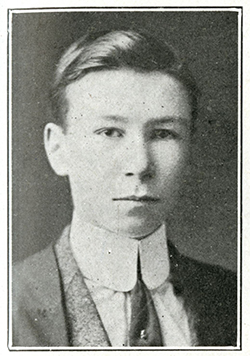 Robert (1915) and Evan (1917) McMillan were brothers from Jacquet River, NB. Both attended Mount Allison, as did all four of their sisters. 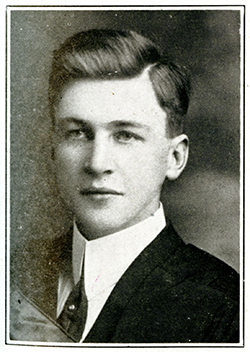 Evan enlisted in 1917 as a cadet with the Royal Flying Corps. During training in Toronto, he was killed when he collided with another plane in mid-air. He was 20. He is buried in the New Mills Cemetery in New Mills, NB.

Robert enlisted in 1916 and transferred to the Royal Naval Flying Service — the forerunner to the Royal Air Force — later that year. He went overseas in early 1917 and that fall was reported missing in action. It was later discovered he’d been taken prisoner and he spent the rest of the war as a POW in Germany. He married after the war and he and his wife had at least one child, a daughter, whose birth was announced in the Record in 1931.

James (1910), Sidney (1919), and Thomas (1921) were the sons of Mount Allison mathematics professor Sidney W. Hunton, for whom Hunton House is named. All three attended Mount Allison.

James, the eldest of the three, enlisted in July 1916. He moved to Edmonton, AB after the war, where he worked for Canadian Pacific Railway. He married Hazel Glennie from Oxford, NS in 1921. James signed up for service again during the Second World War and retired as a captain in the Canadian Army in 1949. Hazel died in 1950 and James later remarried. He died in 1960 and is buried in the Sackville Rural Cemetery with his parents.

Thomas, the youngest of the boys, enlisted in May 1917, before completing his studies. He was wounded in September 1918 and never returned to the front. He returned to Mount Allison after the war and completed a mathematics degree, then did post-graduate studies at Yale. He married Jean McNish in 1931 and worked as an assistant actuary with the statistical division of the Canadian Underwriters Association in Toronto for 35 years. He attended the opening of Hunton House in 1959. Thomas died in Huntsville, ON in 1963.

Sidney, the middle brother, is a little more of a mystery. Sidney enlisted in May 1916 before completing his studies at Mount Allison. He attended King’s College Law School in Saint John, NB after the war, but there are no further mentions of him after 1921, including in obituaries for his father and brother. However, it appears Sidney moved to the U.S. sometime after 1921 and changed his name to Ralph James Houghton — a name he lived under until his death in 1972 in Texas. Ralph worked in the circulation department of the Chicago Sun — first in Chicago, then in Michigan, and later in Texas. He married Beulah Black in the 1930s and, after her death in 1961, he married Elizabeth Foggy. 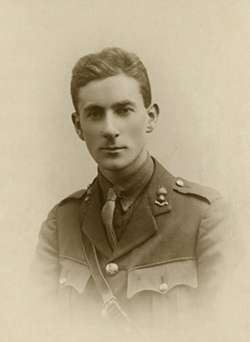 Wilfred Dawson (1914), son of Grace Annie Lockhart, served in the First World War as a gunner. The Record previously wrote about Dawson in Immeasurable inheritance in the Winter 2016 issue. 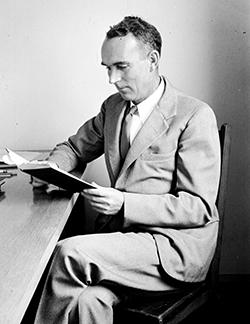 Stanley Chambers (1913) enlisted the day after the First World War began, was blinded during the Second Battle of Yprès, but miraculously had his sight restored. The Record spoke with Chambers’ grandson and told his remarkable tale in Miracle at sea in the Fall 2018 issue.

Many thanks to associate librarian Elizabeth Millar; university archivist David Mawhinney; and archival intern Renée Belliveau for their assistance with research and provision of photographs.