Dr. Ilaria Battiloro is an associate professor in the Department of Classics and the co-director of the Venus Pompeiana Project. She teaches Greek and Roman archeology, archeology of Magna Graecia, and courses on archeological investigations methods and techniques. 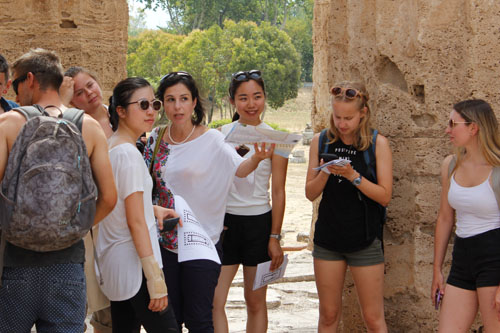 1. What is the Venus Pompeiana Project?

This past summer Mount Allison signed a Memorandum of Understanding with the Archaeological Park of Pompeii in order to launch a new project on the Sanctuary of Venus in Pompeii, in collaboration with the University of Missouri (the co-director of the project is Dr. Marcello Mogetta).

This research project provides an opportunity for Mount Allison students to take part in excavations at Pompeii, the ancient city near Naples that was destroyed and buried during a massive volcanic eruption in AD 79. Between 6th century BC and 1st century AD Pompeii featured a mix of different cultures, a unique ethnic and cultural history that makes this ancient site a relevant place to study the complexities of cultural identity of past communities, which can be readily detected in public monuments such as a sanctuary.

The first field season of archeological excavation on the site was funded by Mount Allison University (President’s Research and Creative Activities Fund), the Department of Classics, and the J.E.A. Crake Foundation.

2. What kinds of work do the students get to do?

They take part in a five-week program on site. The aim is to introduce students to the techniques and methodologies of field archeology through direct, hands-on, experiential learning, so they get both practical skills and contextual training. The program also teaches the full range of techniques that make up the modern archeologist’s toolkit: excavation strategies, data recording and digital modeling, and artifact recovery, processing, and analysis. Thirteen students, including nine from Mount Allison, took part in the 2017 summer excavation. 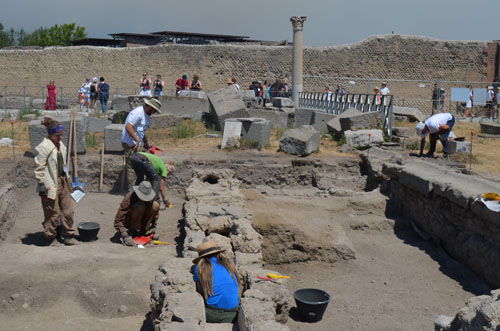 3. What makes this program special?

The residential character of the program facilitates the development of a community of scholars working on the same project, comprised of students and staff. And then there is Pompeii itself — it has a definite international character with a number of research projects run by international institutions and scholars. It allows the students to be part of a larger research community that is designed to investigate and promote the most famous archeological site in the world, so they have the unique opportunity of relating their work to the overall research carried out in Pompeii, which involves many universities and research institutions.

The program will run for at least two more years, and the final publication in digital format is scheduled for 2021.

4. What is the Sanctuary of Venus?

The Sanctuary of Venus is one of the most important cult places of Pompeii. The visible structures consist of an imposing podium temple surrounded by a triporticus. From past investigations, we know the sanctuary was in a phase of reconstruction after being damaged by an earthquake in AD 62. The restoration was never completed as the dramatic eruption of AD 79 interrupted the building activities undertaken in the area.

5. Did you find out anything interesting during the excavations last summer? 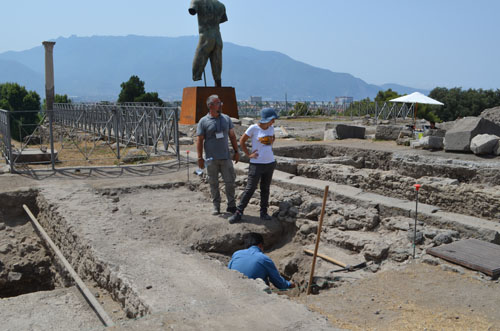 The results of the most recent excavations carried out in 2004-2007 combined with some of the tests carried out by Mount Allison and the University of Missouri this past summer have revealed tantalizing evidence of architecture and votive deposits below the earliest monumental sanctuary dating from the pre-Roman phase of the site, and precisely the Samnite phase, so-called because it saw the Samnites’ presence in Pompeii. This has sparked a debate about the possible existence of a Samnite cult place dedicated to the Oscan goddess Mefitis, a sanctuary that would have been later rebuilt in a monumental appearance. The cult of Mefitis would thus have been turned into a cult of Venus, an assimilation of the two deities not new in the Oscan-occupied area of southern Italy that became subject to the Roman military and, therefore, cultural dominion.

Find out more about applying to take part in the Venus Pompeiana Project: visit https://www.mta.ca/pompeii/ or attend the information session scheduled for Monday, Jan. 15 at 3:30 p.m. in the Crake Room, 4th floor, Hart Hall.

Photo captions:
Dr. Ilaria Battiloro lecturing at the Archaeological Park of Paestum
Mount Allison students take part in the excavation of the Sanctuary of Venus in Pompeii