Fourth-year honours PPE (Philosophy, Politics, and Economics) student Daniel Gold of Vancouver by way of Montreal is one of three students who is the recipient of the L.R. Wilson Internship. The awards, valued at $10,000 each, seek to provide students with first-hand work experience in a public service and public policy setting. 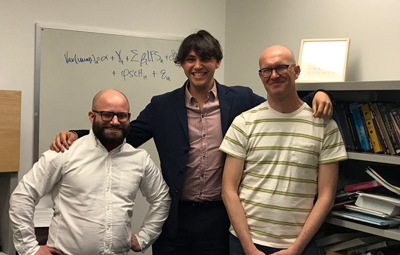 1. What is your summer internship?

I am working at the Department of Finance in Ottawa, where I am a part of the Economic Studies and Policy Analysis Division (ESPAD). Basically, ESPAD’s mandate is to work on longer term economic studies. Some projects that my peers are working on include the effects of daycare facilities in the Northern Provinces on Indigenous language use and female employment participation; and the effects of different unemployment insurance schemes on matching unemployed workers with high quality, suitable employment. My project specifically looks at the effects of industrial diversity on the stability of regional economies. I examine this question both theoretically and empirically, the Labour Force Statistics, which is a massive data set spanning from 1976 to today and is posted monthly. In order to access the data for my project, I actually had to become a deemed employee of Statistics Canada!

2. Best thing about summer on location for your internship?

Ottawa, believe or not, is an absolute gem. It is an incredibly active city, with regular runs along the canal at lunchtime, easy access to the outdoors, and tennis courts spotted all over the city. This year, I gained about 20 pounds by eating lots of McDonalds and staying cloistered in my bedroom office during the winter months, so living in Ottawa has given me plenty of opportunity to exercise and stay active. Otherwise, Ottawa always has festivals going on. I am also happy to say that Ottawa is only a 2-hour drive away from Montreal.

3. What are you involved in on campus?

This past year, I took the initiative to create an active, engaged PPE Society. This involved simple get-togethers, such as potlucks, movie nights and socials. I am excited for this coming year, as I have many ideas to share with my fellow PPE students. We are looking to connect with Indigenous communities that are located near Mount Allison in order to invite prospective future students to campus. We will also be hosting a debate night, which will feature beer from Bagtown Brewery [a craft brewery started by Mount Allison students].

Otherwise, I plan to give an interdisciplinary talk at some point in the new year. I will also be TAing Calculus II. I am sure there will be plenty of other opportunities that come my way, as is usually the case at Mount A.

4. What are you looking forward to in your final year?

For the most part, the schoolwork. I am excited for both my Econometrics class, as well as one I am taking called the Philosophy of Scientific Models. I have had the pleasure of using and expanding the skills I learned at Mount Allison last year in my Intro Econometrics class throughout my internship this summer. I plan to continue my project throughout the school year and hope to publish it before the school year’s end. I hope to work with my professors in developing new skills that will add richness to my project.

I am also excited to continue my work on developing PPE Society. In some ways, I see it as a legacy project. I hope to leave it in good standing, with students who will pass it down through the generations.

5. What’s one piece of advice you would give to your first-year self?

Don't be deterred by controversy; don’t be afraid to be wrong.