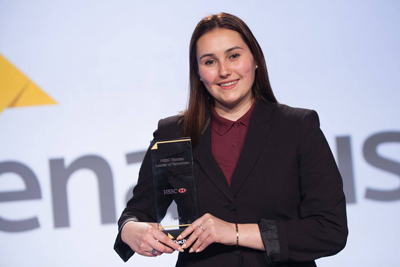 Mount Allison came to my high school (Dartmouth High) when I was in Grade 12. I really got along with the admissions counselor and was impressed with the opportunities to do research and play sports at the undergraduate level. These features really stuck out for me and it was the only school I applied to.

I was interested in physics before Mount A. I had a really great high school physics teacher. I tested out all the sciences at Mount Allison but physics really stuck out for me. I’ve had some great research opportunities as well, working with Dr. David Hornidge for two summers.

I also minored in Commerce, a combination I’m not sure I would have been able to pursue at every university.

3.What have you been involved with during your time at Mount Allison?

I worked as the Varma Scholar in Physics during my fourth year. This opportunity allowed me to have some great experiences in and outside the classroom. I did a lot of outreach work in physics, running tutorials, working with high school students through the Let’s Talk Science program.

This year I worked with the newly formed Women in Science society, which has a particular focus on encouraging young women to learn more and get involved in the sciences. I worked with them to run the Girls in Science Day on campus. I was also president of the Mount Allison physics society.

Outside the sciences, I have been very involved with Enactus MtA, an international organization with a focus on improving the livelihoods of people in communities through entrepreneurship, which I learned about through my Commerce classes in my first year. I helped form a new partnership with Enactus and Leadership Mount Allison this year so the two societies could work together. I’ve had some wonderful experiences in the community through these groups and got to work on some really great projects. I also played soccer and basketball during my first two years at Mount Allison.

4. You received two major awards this year: Mount Allison’s Frances S Allison Award and also named a national Woman Leader of Tomorrow by HSBC, presented at their national event in Toronto. What do these honours mean to you?

I was so honoured by both these awards. Being recognized for my involvement at Mount Allison is humbling, there are so many wonderful, engaged students here and I’m proud to be a part of this.

The HSBC Award is also a great honour. The award is meant to encourage being a good role model, working to inspire and empower young women and girls. I hope my work in science and community outreach, both at Mount Allison and with regional and national organizations such as Let’s Talk Science and Enactus, has helped contribute to this in a small way.

This summer I’ll be travelling in Europe for a few weeks and then working in Toronto with Capital One as a business analyst starting in September. I plan to pursue grad school in the future.

I also want to start an alumni group for Enactus Mount Allison. I got so much out of this experience, it will be great to stay in touch and give back some of the great advice I received as a student.

Bonus question: Any advice for future or current students at Mount A?

Get involved early on during your time at Mount A. I wish I had gotten involved in more groups at an earlier age. Also, get to know your professors and members of the University administration early. There are so many great contacts and resources on campus; you just have to connect with them.