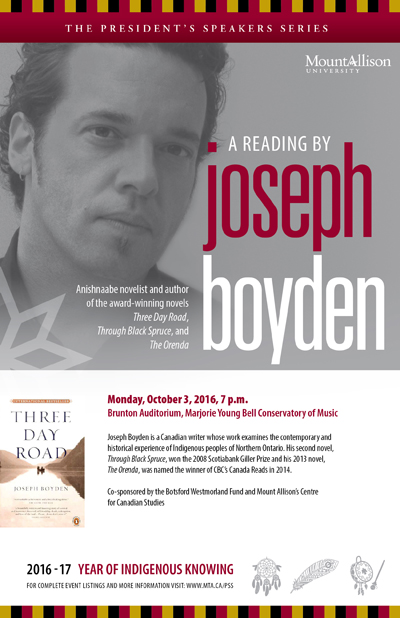 SACKVILLE, NB — Mount Allison will welcome award-winning novelist Joseph Boyden to campus as part of the University’s President’s Speakers Series celebrating the Year of Indigenous Knowing on campus. The event will take place on Monday, Oct. 3 at 7 p.m. in Brunton Auditorium, Marjorie Young Bell Conservatory of Music. Everyone is welcome to attend.

Boyden, an Anishnaabe novelist and author, is best known for his award-winning novels Three Day Road, Through Black Spruce, and The Orenda, which was named the winner of CBC’s Canada Reads in 2014. His work examines the contemporary and historical experience of Indigenous peoples of Northern Ontario. He is frequently called on by many national media outlets, such as the CBC and Maclean’s magazine for his insight around Indigenous and literary issues.

“Joseph Boyden is an influential and popular author, academic, and activist in the Canadian Indigenous and literary communities,” says University President and Vice-Chancellor Dr. Robert Campbell. “We are pleased to welcome him back to campus during Mount Allison’s Year of Indigenous Knowing and look forward to his participation in the President's Speakers Series." In anticipation of this event and the University’s Year of Indigenous Knowing, and with the generous support of its Centre for Canadian Studies, all first-year students at Mount Allison received a copy of Three Day Road during Orientation. The novel is also part of the curriculum for many first year English courses this year.

Books will be available for purchase on site from Sackville’s Tidewater Books at the Oct. 3 event.

Mount Allison’s Year of the Indigenous Knowing will encourage the campus and wider community to explore Indigenous issues relating to their historical and current surroundings through several lenses — societal, cultural, and humanitarian on a local, national, and international scale. The Year of Indigenous Knowing includes several noted speakers, activists, and artists visit campus through the annual President’s Speakers Series as well as other related activities and events such as University Commencement, welcoming new students to Mount Allison and the annual Mansbridge Summit, bringing the Chancellor and special guests to Mount Allison to discuss the indigenization of campus. For updates and a full list of President’s Speakers Series events please visit mta.ca/pss