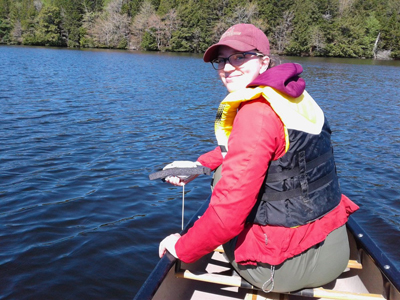 SAEC is an annual student-lead conference where ES students from Atlantic Canada present their research. It was hosted by St. Francis Xavier University. The conference theme this year was Environmental Remediation and Mitigation: Our Responsibility.

Houinato and Noel presented research they undertook as part of a group project for the course Research Methods in ES. The group studied the radial growth of sugar maples in Fundy National Park. “We found that there was a long-term decline in the growth of sugar maples for 25 years in the park,” said Houinato. "We thought this was particularly interesting." 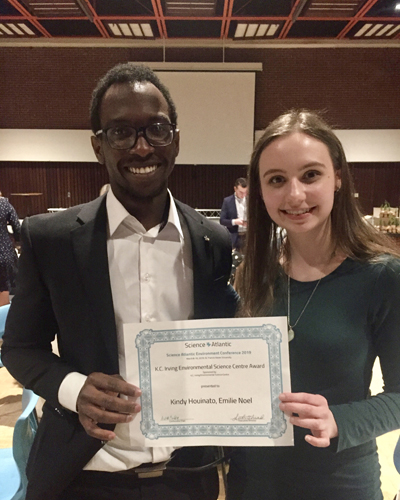 For Noel, who comes from Dalhousie, NB, one of the best parts of the conference was the chance to learn from other presentations and share the knowledge she and Houinato had acquired with other participants. “I got to see presentations from students from across the Maritimes, and I made a lot of new friends. It was great!”

Houinato, who is an international student from Benin, was able to use both his economics and ES skills when analyzing data they gathered in their work. He is also using these skills in a separate project for an economics course. “For my econometrics project, I am studying the relationship between climate change, which in my study is proxied using changes in temperature and precipitation, and GDP in Sub-Saharan African countries,” he explains.

Campbell presented her research on the potential impacts of mink farming on lake water quality in southwestern Nova Scotia. This research is one part of a multi-university project, which includes Mount Allison, Dalhousie, Acadia, Queen’s, and Ottawa. The mink industry is one of the top exporters in Nova Scotia, but there is growing concern over declining water-quality in lakes adjacent to mink farms. Campbell is examining how two species of midges have responded to changing water-quality over time in five lakes in the province.

“Mink farming has only been regulated since 2013, and before that there was often excessive nutrients running into lakes, which in turn, caused a dense growth of plant life, such as algae blooms. The death of these plants produces reduced oxygen levels, and this leads to the death of animal life,” she said.

“I am studying midges specifically because they are sensitive to oxygen levels in the lakes. One of the midge species is better adapted to low oxygen levels than the other one, so if this species is more abundant relative to the other over time, it indicates declining oxygen over this period.”

When Campbell examined lake sediments dating to periods prior to the 1950s, she found chironomids midges that thrive in higher oxygen conditions. However, their abundance fell in later years as more nutrients flowed into the lakes.

“It is really cool to be part of a project that is trying to help a community solve a problem. And it felt really great to present research that you have worked on steadily for a long time—and receiving an award for the work is an unexpected bonus.”