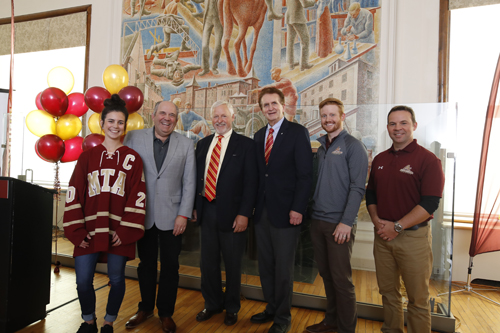 The new scholarship and bursary program will help support Mount Allison’s student-athletes, allowing them to succeed in both the classroom and in the game. To date, $1-million has been pledged towards the James Rogers Student-Athletes Awards.

“The new student-athlete awards and the endowment represent a new level of support for our varsity athletes and their academic and athletic endeavours,” says Robert Campbell, President and Vice-Chancellor of Mount Allison University. “We thank our donors for this consequential gift. It is very much a game-changer for our athletics programs.”

The awards and endowment are named in honour of James (Jim) E. Rogers, former chairman with BackOffice Associates, a worldwide leader in information governance and data modernization based in the United States. He currently serves on multiple public and private boards across North America. The James Rogers Student-Athlete Awards are funded by friends and colleagues of Rogers, including his friends and colleagues at BackOffice Associates where he served for many years as Board Chair.

“Jim Rogers has served as a mentor and role model to many at BackOffice Associates, including myself,” says David Booth, current CEO and Chair of BackOffice Associates. “We are pleased to honour his leadership and hope to inspire the same in Mount Allison’s student-athletes.”

In addition to their academic demands, varsity athletes at Mount Allison invest an average of 30 hours per week to their sport through training, practice, travel, and game time. Through this experience student-athletes are able to gain important life skills such as communication skills, teamwork, time management, resilience, and leadership.

The awards program is part of the larger James Rogers Endowment for Athletics being established at Mount Allison. This endowment will help support athletics and recreation at the University, growing over time to meet current and emerging needs in the program.

The awards will be available to student-athletes beginning in the 2018-19 academic year.