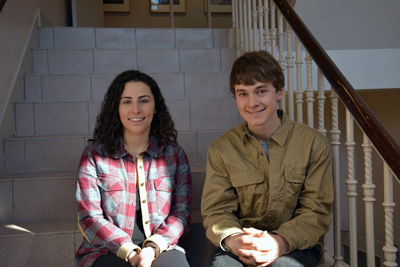 SACKVILLE, NB — Third-year philosophy, politics, and economics (PPE) students Danica Garner and Daniel Michaelis-Law have been selected as this year’s L.R. Wilson Interns in Public Service and Public Policy at Mount Allison University. The awards, each valued at $10,000 annually, seek to provide students with first-hand work experience in a public service and public policy setting.

Garner will be completing her internship in the office of the Corporate Secretary of Environment and Climate Change Canada (ECCC), while Michaelis-Law will be working in New Brunswick Green Party MLA David Coon’s Fredericton South constituency office. Both internships are four months each.

“The Wilson Internships provide our students with unprecedented experiential learning opportunities in public service and policy,” says Mount Allison University President and Vice-Chancellor Dr. Robert Campbell. “I would like to congratulate Danica and Daniel on their upcoming internships and thank Mr. Wilson for his generous support of Mount Allison’s PPE program.”

“There are several branches within the ECCC office, focusing on different environmental areas,” says Garner, who is completing both her Bachelor of Arts and her Bachelor of Commerce simultaneously. “I’m excited for the opportunity to work in areas around climate change. ECCC seemed like a good fit for my PPE studies.”

Michaelis-Law is completing his PPE degree with a minor in computer science. He will be working on several projects in NB Green Party MLA David Coon’s office as well as consulting with Mount Allison political science professor Geoff Martin throughout his internship.

“I’m excited at the prospect of working on various lobbying campaign and gaining some insight into the political process,” says Michaelis-Law. “I’m originally from Fredericton so it’s a bonus to be working with the Green Party in this region.”

In September, following their internships, both Garner and Michaelis-Law will give public presentations at Mount Allison on their experiences. They will also share their experiences as part of the University’s annual Summer Undergraduate Research Fair (SURF) this fall.

About the Philosophy, Politics, and Economics (PPE) program

Established in 2013 and one of only a handful in Canada, Mount Allison’s Philosophy, Politics, and Economics program helps students develop critical thinking skills that will serve them well no matter their chosen career. This multidisciplinary program gives students the opportunity to look at the world through three distinct disciplines and begin to recognize how each of these aspects of society work with and against each other.

Photo caption: Mount Allison University students Danica Garner and Daniel Michaelis-Law have been selected as this year’s LR Wilson Interns in Public Service and Public Policy. Garner will be completing her internship at the office of the Corporate Secretary of Environment and Climate Change Canada (ECCC), while Michaelis-Law will be working in New Brunswick Green Party MLA David Coon’s Fredericton South constituency office.