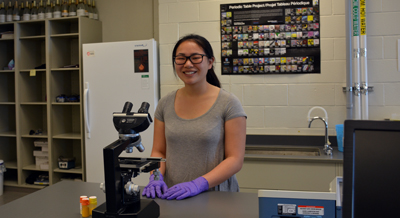 Fourth-year honours chemistry student Maia Murphy is spending her summer in one of Mount Allison University’s renovated chemistry labs. Murphy is one of several students who has been awarded an Undergraduate Student Research Award from the Natural Sciences and Engineering Research Council of Canada (NSERC). Her project, Synthesis of Novel Main Group Compounds as Potential Ligands for Transition Metals, is fundamental inorganic chemistry.

“I’m studying the reactivity between acyl chlorides and phosphorous-boron containing compounds, called phosphinoboranes. I’m trying to see if they will react together and if so, how they are interacting,” she explains. “This builds upon past research conducted in the Westcott lab and learning about such interactions is exciting not only from an academic standpoint, but also because of its potential applications in industry.”

Murphy is working with Mount Allison chemistry professor and Canada Research Chair in Boron Chemistry Dr. Steve Westcott. She will continue her research through her last year at Mount Allison as part of her honours research project.

“Maia’s research is fundamental in nature, which makes it a challenging project,” says Westcott. “I am continuously impressed with the quality of her work and her commitment to her research. She has been a wonderful addition to our lab.”

From Margaree Forks, NS, Murphy says she was always interested in science but really took an interest in chemistry during her second year at Mount A.

“I took more Chemistry courses in my second year and joined the Wild Toads Research Group [a chemistry research group open to all students run by Westcott],” she says. “That’s when I really became interested in research.”

After second year, Murphy spent the summer working in Westcott’s lab with fellow chemistry student Max Landry of Moncton, NB. The pair are looking at boron containing molecules and their potential use as anti-bacterial and anti-fungal drugs. They are continuing their research this summer along with individual projects.

“At a small school like Mount A, it’s really easy to talk to your professors and make those connections,” she says. “I’m now spending my second summer on campus as a student researcher and was able to attend the annual ChemCon (Science Atlantic’s annual chemistry conference), which are great experiences to have as an undergrad.”

Outside the lab and classroom Murphy is involved in a number of student clubs and societies including Shinerama, volunteering as a conversation partner in the MASSIE program, a teaching assistant in the Chemistry department, and the President of the Chemistry and Biochemistry society.

Following her time at Mount Allison, Murphy will be exploring the possibility of a career in research with plans to pursue a master’s degree in Chemistry. 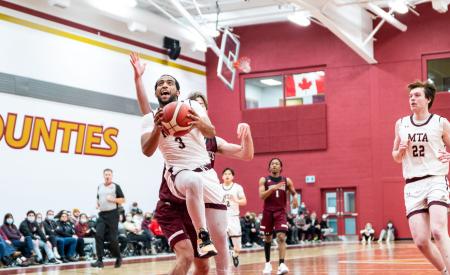