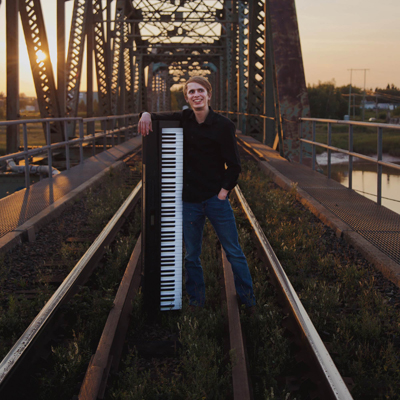 Graeme Zinck is starting this school year at Mount Allison at full speed. The fourth-year Computer Science and Commerce student recently attended Hack the North, Canada’s biggest hackathon, held at the University of Waterloo in September.

“It was an incredible experience,” says Zinck. “Over 1,000 students from around the world were there. We worked in groups and met with leaders in the tech industry over the weekend. It was a great chance to learn new skills and pitch ideas, all in the span of 36 hours!”

Students apply to take part in Hack the North and their participation at the conference is funded by the organization. Zinck was the only Mount Allison student to attend this year’s event.

In addition to being a hackathon participant, Zinck also added recording artist to his resumé this fall, releasing his first album, World of Opportunity, which he recorded in Mount Allison’s own CHMA studio.

“I’ve always been into music and was involved in musical theatre as a kid,” he says. “I write music about life experiences, it’s almost like a musical journal for me.”

Zinck plays piano and sings on the album, which is currently available on Spotify and iTunes.

Zinck will also be heading back to the University of Waterloo later this month to attend the Undergraduate Research Opportunities Conference (UROC 2018), a fully funded, multi-day event that brings undergraduate students to the University of Waterloo to experience life as a computer science graduate student. He will be attending with fellow Mount Allison CS student and his summer research partner Mac Clevinger.

“We looked into the security of internet services, specifically if you combine two services, are they still secure,” explains Zinck. “We did a lot of background reading on how we could illustrate security in services. Once we had our foundations down, Mac did a lot of the programming, while I focused on the theory element.”

The pair are writing a paper and hope to present their work at a CS conference in the future.