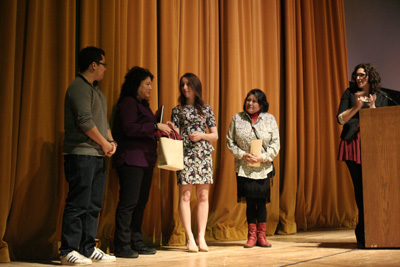 The Class of 2016’s Last Lecture event included a significant announcement from the graduating class. This year’s graduates have established the Chris Metallic Prize in Indigenous Leadership at Mount Allison.

Named in honour of Chris Metallic, a Mount Allison University student who went missing in 2012, the award will go to a student annually who makes the most contributions to the indigenization of campus that year.

“We wanted to do something to honour Chris and his impact on campus,” says Class of 2016 grad executive president Piper Riley Thompson. “Our class was in our first year at Mount Allison when Chris went missing. We want to ensure he will always be remembered at Mount Allison.”

Members of the Metallic family were in attendance for the announcement at the Last Lecture.

Riley Thompson, along with fellow members of the Class of 2016 executive Sarah Donaldson (treasurer) and Lindsay Downey (secretary), and 2015-16 Layton Fisher Intern in Philanthropy Hanna Daltrop, worked to determine the gift and fund raise. 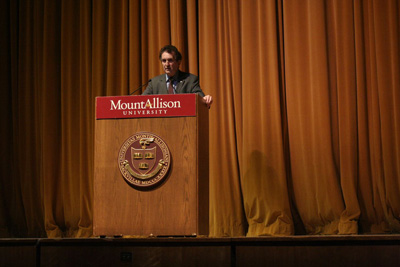 Mount Allison University President and Vice-Chancellor Dr. Robert Campbell and his wife, English and Director of the Centre for Canadian Studies Dr. Christl Verduyn also announced at the Last Lecture that they would match the funds raised by the Grad class, bringing the fund total to $4,000. This secures funding for the award for ten years.

“Christl and I and our family wanted to support the class of 2016 gift, because Chris Metallic galvanized our indigenous students into becoming a cohesive community,” says Campbell. “They are accelerating the transformation of our university according to the report of the Truth and Reconciliation Commission. We wanted to acknowledge and encourage this indigenous student leadership.”

The Chris Metallic Prize in Indigenous Leadership will be awarded for the first time in 2016-17 during Mount Allison’s Year of Indigenous Knowledge.

University President and Vice-Chancellor Dr. Robert Campbell announces a matching donation from the Campbell-Verduyn Fund in support of the Chris Metallic Prize in Indigenous Leadership.