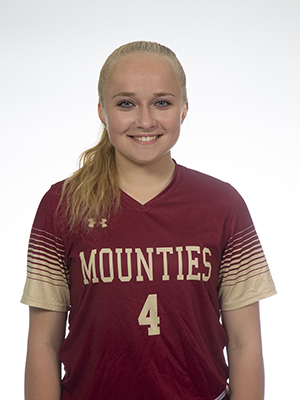 “I had heard really good things about Mount Allison’s academic programs and I was given more opportunities in soccer. It was also nice to have familiar faces when I arrived,” says Woodside.

Woodside started playing soccer when she was five and joined West Ottawa at 10 in the competitive program. At 14 she joined the Ontario Youth Soccer League (OYSL), travelling to Toronto every weekend to play.

“I have always really enjoyed the time in the locker room with teammates right before going on the field and the atmosphere of being on the field,” she says.

Woodside captained her high school soccer team all four years and was named MVP twice. Along with Pilzmaker, Ward, and Lundin, her U-16 team won the ESPN Showcase at Disney in Florida, which she credits as her most memorable sporting moment.

She was recently recognized as Athlete of the Week for her performances vs. SMU and CBU. 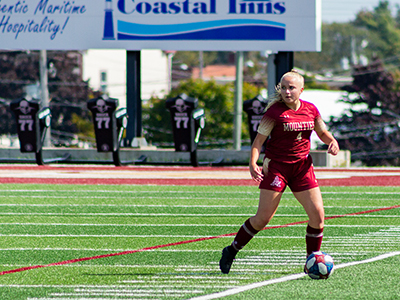 “Coming into training camp this year, I knew more of what to expect,” she says. “This award validates all the hard work that I put in over the summer.”

A psychology and French student, Woodside says being a student-athlete has given her time management skills and the opportunity to meet more people on campus and to make lifelong friends.

“Playing sports together, you have a different bond,” she says. “You come in automatically having 19 friends.”

Pursuing a career in psychology has been Woodside’s path for a number of years with the planned next step being a master’s in child psychology in Scotland.

“What I enjoy most about the field is helping people through issues and being a person who they can rely on,” she says.