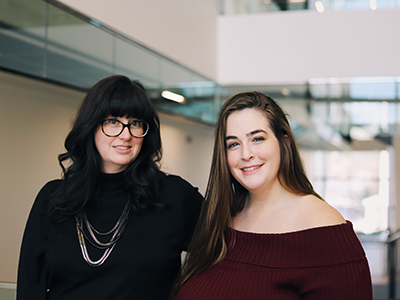 Fourth-year honours international relations student Jill MacIntyre is a first-generation student — her parents didn’t have the opportunity to attend university. Coming from a working-class family in Prince Edward Island, she knew she would have to finance her education with scholarships, bursaries, summer and on-campus employment, and student loans. But she didn’t expect the other challenges she would face transitioning to university life.

“It wasn't until I came to university that I realized how much my life had been impacted by class,” MacIntyre says. “Suddenly I was surrounded by many students for whom money had never been a serious issue and for whom university was a given. It was an incredibly isolating feeling to see my peers almost immediately fit in a system that was very confusing and frustrating to me and many other first-generation students.”

She decided to speak out about her experiences through an opinion piece in the student newspaper, the Argosy. She received a lot of positive feedback from peers, professors, and administrators.

MacIntyre sat on a hiring committee as a student representative for a support staff member who would work with first-generation students. This past spring, she also worked with the New Brunswick Student Alliance (NBSA) to bring together a roundtable of first-generation, low-income students at Mount Allison and developed a report to guide their lobbying efforts. Then, last term she was approached by Mount Allison’s Manager of Academic Support Shelly Colette about serving as the intern to assist with programming for first-generation students.

Programming began in the fall with workshops in the areas of navigating university, maintaining a budget, financial aid, and time management. This term there will be a website for incoming first-generation and low-income students, as well as another series of workshops.

Colette was also a first-generation student and understands the particular set of challenges they may face aside from finances.

“I did an English degree and I had never been to a ballet or a Shakespeare play,” she says. “There were cultural touchstones that I had no experience with coming from small-town New Brunswick and not travelling much. Other students had many different kinds of cultural experiences.”

She believes small universities like Mount Allison are a great choice for first-generation students.

“The challenges students may face are just easier to navigate at a smaller university,” she says.

MacIntyre advises first-generation students to be confident in their abilities.

“You have earned the right to be here and have earned your spot,” she says. “Do not underestimate yourself and don't let the fear of competition deter you from applying for scholarships at Mount Allison and beyond.”