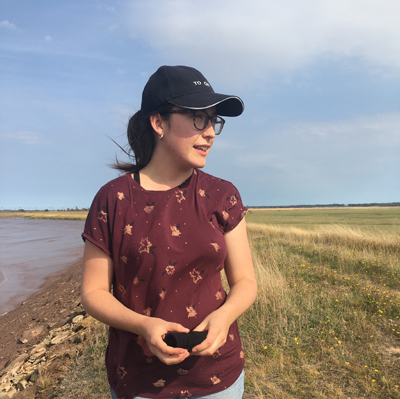 Last summer, with travel not being an option, Mount Allison University Philosophy student Amy Ward created her own internship with Women in parenthesis, a group based in the UK that studies the life and work of four influential British female philosophers.

With support of Mount Allison’s Independent Student Research Grant program, Ward worked with the organization to produce a series of podcasts and blog on the four philosophers, intended for high school and university-aged audiences.

“My research focused on Iris Murdoch, Elizabeth Anscombe, Philippa Foot, and Mary Midgley, known as the Quartet, who met and became friends while studying at Oxford University during WWII,” explains Ward. “A lot of the time, people tend to think of philosophy as an old and primarily male-dominated discipline but there are many female philosophers, such as these four, who have made significant contributions to philosophical studies.”

Ward created five series in total, each comprised of several episodes focusing on Murdoch, Anscombe, Foot, Midgley, and connections between them. She researched, wrote, and produced each recording, even composing original music for the series.

“I was asked to make each episode between five and seven minutes long to make the information as accessible as possible for young people. I think the short episodes make the podcast more accessible to many different audiences,” says Ward.

Ward is currently completing her thesis, focusing on one member of the Quartet, Iris Murdoch, and will graduate this spring with an honours degree in philosophy. She plans to continue her studies in a Master’s program.

This is the second project Ward has completed to bridge her research around philosophy with a modern medium. In 2019 she created podcast on faith and philosophy, Convinced, for which she interviewed 17 local religious leaders, covering several Christian denominations in the region about their sources of conviction.

Women in parenthesis has incorporated Ward’s podcasts and blog contributions into their wider collection of educational resources for both students and teachers. They can be accessed at: https://www.womeninparenthesis.co.uk/ (curated resources).

Hear more from Amy about her research at the 2020 Summer Undergraduate Research Fair: https://www.mta.ca/Prospective/About/Visit_Mount_Allison/Open_Houses/Summer_undergrad_research/