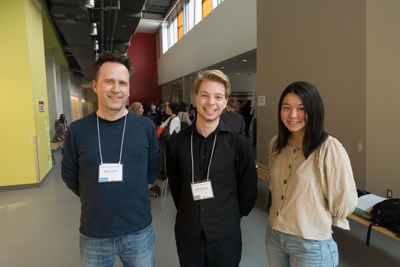 Nicholson’s essay focused on Hispaniola’s current refugee and statelessness crisis. Hispaniola, an island located in the Caribbean, is shared by two countries: Haiti and the Dominican Republic.

Nicholson has been studying how this group of people, left without status or legal rights or representation, have been pushed out of their country and now reside in makeshift refugee camps along the Haitian-Dominican border.

“Despite deteriorating conditions in the camps, the Haitian government can’t, or won’t, lift a finger because it still considers them to be Dominican citizens. In essence, they’re considered too Haitian to be truly Dominican and yet too Dominican to be truly Haitian,” he says.

Dr. Morgan Poteet, Mount Allison sociology professor, is past president and director-at-large for CARFMS. One of his contributions to the Association was to extend the CARFMS annual student essay contest, previously restricted to graduate and law students, to undergraduate students across Canada.

“This is an excellent opportunity for undergraduate students to experience an academic conference and to share their work in a special undergraduate panel,” says Poteet. “Keith was an outspoken student in sociology courses at Mount Allison and his winning paper contributes to the field of refugee studies on a topic that is frequently overlooked in academia.”

The paper originated from Nicholson’s IR honours thesis, and he says it also greatly benefited from courses he took covering topics including racism in Canada, globalization and transnationalism as part of his degree.

Nicholson was involved in a number of organizations both on and off campus. He was on the steering committee for the Sackville Refugee Response Coalition for his four years at Mount Allison and also worked for the Centre for Global Justice. As well, he was a member of the Symphonic Band/Orchestra, MOSAIC, and Model United Nations.

Nicholson, who is originally from DeLand, Florida, now has an internship at one of the organizations he studied for his thesis.

In Cultured Company is a grassroots social justice organization led by young Black and Latin leaders that focuses on reconciliation, conflict resolution, and decolonization among Haitian and Dominican communities.

After completing this internship, he plans to go to graduate school.

“Mount A really encouraged me to find and pursue my own passions,” says Nicholson. “The freedom I was given to discuss, discover, and explore my areas of interest was incredibly valuable. Its emphasis on intersectionality and interdisciplinarity also taught me to connect themes/topics in ways I never would have thought of before. It’s a skill I wish more people had and one that I’m incredibly thankful to have learned.”