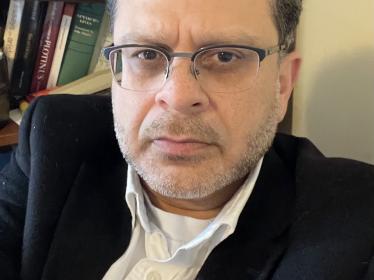 Roopen Majithia completed his schooling in Bangalore and his higher education in the US and Canada. He holds a PhD in Philosophy from the  joint program at MacMaster University and the University of Guelph and is currently at Mount Allison University in Canada, where he teaches widely in the History of Western Philosophy and Indian Philosophy as well as in Ethics. He has written and published on Plato, Aristotle, Shankara and the Bhagavad Gita.

"The Ethical Syncretism of the Bhagavad Gītā," Comparative Philosophy (January 2015)

"On the Eudemian and Nicomachean Conceptions of Eudaimonia," American Catholic Philosophical Quarterly, (summer 2005)

"Self and Soul in Aristotle," Transcendent Philosophy, (June, 2004)

"The Relation of Divine Thinking to Human Thought in Aristotle," The American Catholic Philosophical Quarterly (Summer 1999)