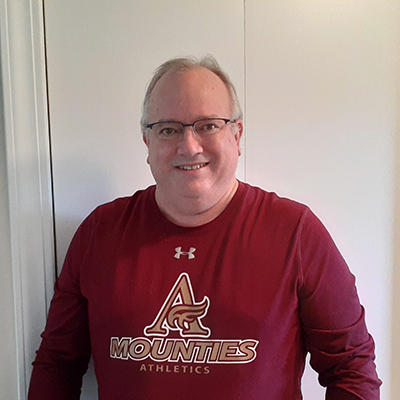 Mounties Men’s Basketball celebrated a historic season in 2020, winning their first-ever ACAA men’s basketball championship. Off the court, alumni Kevin B. Estabrooks and Norval McConnell were championing a focused fund raising effort to support the men’s basketball program — Game On.

In Fall 2019, Game On was launched with the goal of raising $25,000 per year over five years for a total of $125,000. Estabrooks, a second generation Allisonian, former basketball team manager as a student, and long-time Mounties fan, developed the idea for the campaign in collaboration with men’s basketball head coach Steve Chapman (’82,’83) and McConnell.

“It was Steve’s vision, my ideas, and Norval’s hard work,” says Estabrooks.

A competitive three-sport athlete in soccer, basketball, and baseball growing up, Estabrooks has been a long-time fan and supporter of Mounties Athletics. He chose to back this campaign because of everyone involved.

“I knew what kind of team Steve would lead and what type of young person he would recruit,” says Estabrooks. “I like my name to be affiliated with things I believe in.”

Estabrooks knew the campaign wouldn’t be possible without the help of McConnell, who played basketball during his time at Mount Allison and has been a huge supporter of the University and Mounties Athletics since. 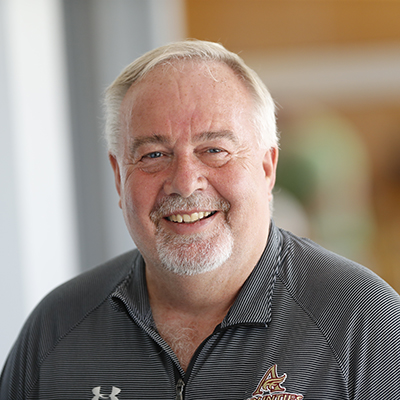 “Getting Norval on board has made it that much easier to move forward,” says Estabrooks. “He exemplifies what we are all about at Mount A. He has brought passion, respect, and contacts to this campaign. Having Steve as a coach also brings that credibility to the ask.”

Becoming part of this effort was an easy choice for McConnell, who also chaired the women’s basketball national championships at Mount Allison in 2017.

“There is so much positiveness around the program,” says McConnell. “Lots of solid young people, good students, and good fits for Mount A. I see the quality of players and coaches in both programs and those are things it’s easy to jump behind and support.”

Chapman is very appreciative of their efforts for the program.

“I have always maintained that if you surround yourself with good people, good things happen,” says Chapman. “In this regard, I am the luckiest person in the world to be coaching at my alma mater, surrounded by an incredible coaching staff and a dedicated group of young men and student-athletes. This certainly extends to all who support our successful basketball program, specifically the Game On initiative spearheaded by two awesome Allisonians and dear friends, Norval and Kevin.”

The successful campaign has been built entirely on connections and reaching out to their own personal networks. Efforts have been put on pause during the pandemic — but to date more than $90,000 has been raised to provide funding for pre-season tournaments and financial aid. Gifts have been made by alumni from the 1950s to 2015. In September, a COVID-friendly, small-scale golf tournament was held in Moncton, raising $6,000, which was split between the men’s and women’s basketball programs.

Estabrooks, who spent his career in the federal public service at Customs and Public Safety, says that giving back was instilled in him from a young age.

“I grew up in a household where my parents were big volunteers,” says Estabrooks. “It was a big part of me growing up. Mount A has always been part of my family and this is just another way I could give back.” 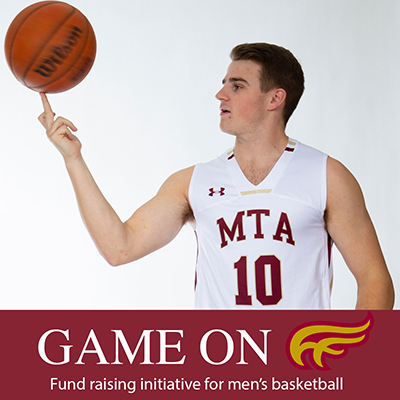 If you would like the support the Game On campaign, you can donate online at mta.ca/donate or contact Manager of Alumni Giving Marcie Meekins at mmeekins@mta.ca.